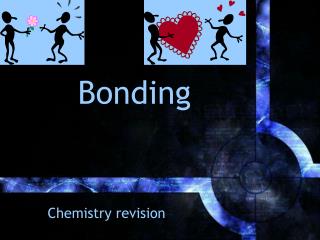 Bonding. Chemistry revision. There are two types of bonding you need to be familiar with…. Covalent bonding Ionic bonding. You will be re-visiting…. The structure of the atom. Why atoms want to lose or gain electrons. Which type of materials use covalent or ionic bonding. Bonding - . forces that hold molecules together. learning goals. students will: understand how ionic and covalent bonds

Bonding - . two or more atoms join together to form a stable group. there are several types of forces (bonds) which hold

Bonding - . 8 out of 75 m/c questions free response—every year. in general:. all bonds occur because of electrostatic

Bonding - . mr field. using this slide show. the slide show is here to provide structure to the lessons, but not to limit

Bonding - . formulas. chemical formulas tell us what elements a compound contains and the exact number of the atoms of

Bonding - . chemical bonds. bonds are forces that hold groups of atoms together and make them function as a unit. bond

Bonding - . chapter 7. names of elements (don’t write). the most common source for element names is a property of the

Bonding….. - Bonding…. warm up:. draw the lewis dot structure for: what is the charge ( oxidation number )?

Bonding… - . intra molecular forces. bonds that occur between atoms example: h-o-h, the bonds that hold the h to the o

1.6 Bonding - Ionic bonding a. recall and interpret evidence for the existence of ions, limited to physical properties of