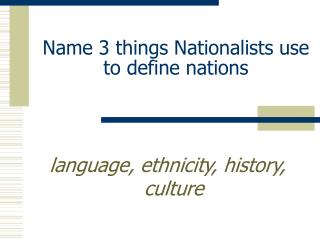 Name 3 things Nationalists use to define nations. language, ethnicity, history, culture. What kind of people did liberals tend to be?. Wealthy, educated & excluded. Who did liberals want to deny representation to? Why?. lower classes, unfit for rep (nothing special about them). Name 3 things Nationalists use to define nations - . language, ethnicity, history, culture. what kind of people did

French Canadian Nationalists - What do you see? when do you think this picture is? how does the picture relate to power

Define and Use Probability - . section 10.3. objectives:. define probability find the likelihood that an event will

Christian Arab Nationalists - Ch. 13 the roots of arab bitterness why do you think the author chose this title as

3 Things to Consider When You Use Waterproof Paper

3. Define Cerebral Palsy - . this is a collection of diverse syndromes characterized by disorder of movement and posture

NAME OWNER AND DEFINE THE PROCESS - . -define what is to be worked on and by whom -establish extent of process to be

3 Simple Steps To Define Top 5 Priority - As you grow in life and get more and more responsibilities, it becomes hard for

3 IMPORTANT THINGS TO NOTE: - . joshua had everything in the world going for him, but still needed reassurance and,. b.