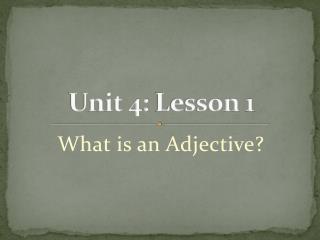 Unit 4: Lesson 1. What is an Adjective?. Objectives. Students will: Identify adjectives and the nouns they describe. Definitions. What is an adjective? A word that describes a noun or a pronoun. The large church was crowded. Adjectives can also describe “what kind.” Unit 4: Lesson 4 The Cobbler’s Song - . a fable by, jean de la fontaine. today we will be learning about:. suffix