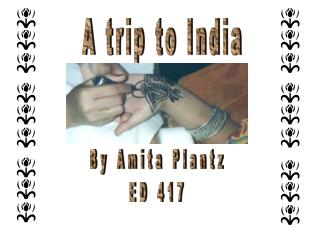 A trip to India. By Amita Plantz ED 417. Unit: Asia Grade level: 3 Lesson: India. Objectives. As a result of this lesson, the student will be able to: Locate India on a world map Identify India’s flag Explain why the Taj Mahal was built A trip to India - . by amita plantz ed 417. to find india on a world map: locate asia. india is a large country in

Art Trip to Kolkata , India - . mrs christoforou and miss mure had a fantastic opportunity to visit our partner school,

Make a Memorable Trip to Kashmir of South India - Munnar is really a gift of god. this famous tourist destination is

A trip to Scotland - . start at hamburg airport. where is scotland?. let‘s go. is glasgow a big city?. scotland from

A TRIP TO LONDON - . close your eyes, think about london and try to imagine it in your mind. describe what you

A Trip to Mars - . douglas marks ncssm. the problem. find a flight path from the earth to mars. approaches. define an

A trip to Ranweli - . by ethan danesh. the fun together. on the slide. during the talent show. me doing an act with

A Trip to London - . what interesting places would you like to visit in london? name as many sights as you can. read the

A Trip to Hawaii - . things the three little pigs and the magic shark didn’t tell you!. the hawaiian islands, once