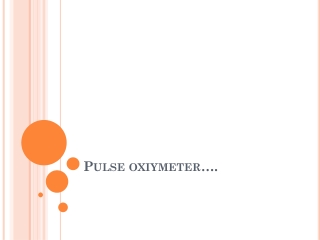 Pulse oxiymeter …. pulse oximeters measure how much of the hemoglobin in blood is carrying oxygen. Pulse oximeters are in common use because they are: non invasive cheap to buy and use can be very compact detects hypoxaemia earlier than you using your eyes to see cyanosis. Sleep and Dreaming - The first 90 minutes after you fall asleep: chapter 5 realms of sleep stage 1. feel self drifting

Pulse - . the pulse has been studied for centuries. information gained: frequency, regularity patency of peripheral

DIGITAL COMMUNICATIONS Part II - . line coding and pulse shaping (chapter 7). statement of the problem. on the way from

Arterial Pulse - . what do u understand by term pulse ?. the alternate expansion and recoil of elastic arteries after

Section 6 – 1 Momentum and Impulse - . momentum (p). a vector quantity defined as the product of an object’s mass and