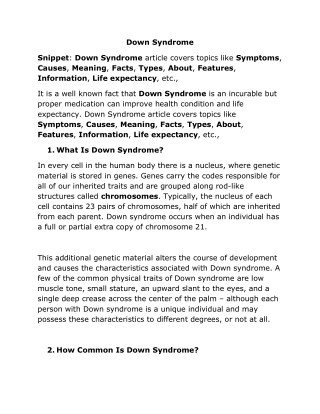 It is a well known fact that Down Syndrome is an incurable but proper medication can improve health condition and life expectancy. Down Syndrome article covers topics like Symptoms, Causes, Meaning, Facts, Types, About, Features, Information, Life expectancy, etc.

DO YOU HAVE THE METABOLIC SYNDROME? - . you're never too young to have it jacqueline a. eberstein, r.n. what is it?. aka

DOWN SYNDROME - . emily pollakowski, md. background. in 1866, down described the clinical characteristics we know now as