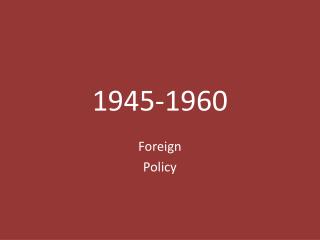 1945-1960. Foreign Policy. Cold War. 1945-1990 Period of increasing tensions (short of war) between the US and the USSR. Containment Policy. The US policy of allowing the USSR to keep any gains, but not allowing them to gain any more Developed by George Kennan in his “Long Telegram”. THE BATTLE OF THE ATLANTIC - . september, 1939 – may, 1945. basic facts. the longest continuous military campaign of