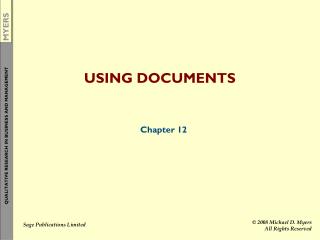 USING DOCUMENTS. Chapter 12. Introduction. As well as using interviews and fieldwork to gather data, it is also possible to gather data from documents Documents such as emails, blogs, web pages, corporate records, newspapers and photographs record what someone said or what happened Scanning Documents Using - . introduction. imagenow is a software that lets you scan, store and retrieve documents with a

Using iPlan to Submit Documents - . fall 2012. registering your a ccount in iplan. registration link. each principal who

Using Documents and Local History - . starter pictures, maps, what we might see our on our winchester walk. the story so

Using XSL to Generate XHTML Documents - . roger l. costello xml technologies. what is xhtml?. with html you can omit end