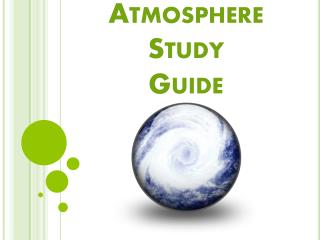 Atmosphere Study Guide. 1. What are the two most abundant elements in the atmosphere (percentage)?. 1. Nitrogen – 78% 2. Oxygen – 21%. 2. What is water vapor?. Water that is in a gas form source of water: vapor: evaporation from Earth’s surface.

Solar System Study Guide Answers - . 1. what is the difference between geocentric and heliocentric?. geocentric: earth is

Weather Study Guide - . section 1: vocabulary. 2 points each (matching). what are all the particles of air pressing on a

Composition of the Atmosphere - . today’s objectives. students will be able to:. distinguish gases between fixed,

Distribution of Gases in the Atmosphere - . most gases are well mixed and distributed evenly throughout the lowermost 100

Chapter 6 The Atmosphere and the Oceans - . look for the following key ideas in chapter 6. the interaction of ocean and

Origin of the Earth's Atmosphere - . 1. hot . why? - primordial heat, collisions and compression during accretion, decay

Weather Study Guide - . draw windward and leeward. which side of mountain gets most of rain and which side is desert?.

The Earth’s Atmosphere - . the

Ch. 15- The Earth’s Atmosphere - . objectives: *to explain what the earth’s atmosphere is *to explain how gases in

Air Masses and Weather Fronts Study Guide Notes - . the study of weather is meteorology. someone who studies weather is

The Earth’s Atmosphere - . also water vapor (most near the surface of the earth), dust and pollutants (e.g. sulfur

Chapter 5 study guide - . 1. describe the relationship between atmospheric pressure and elevation. 2. describe the

The Earth’s Atmosphere - Chapter 4. the earth’s atmosphere. chapter 4 study guide. 1. describe the composition of the

THE EARTH’S ATMOSPHERE A guide for GCSE students - . 2010 specifications. knockhardy publishing. the earth’s