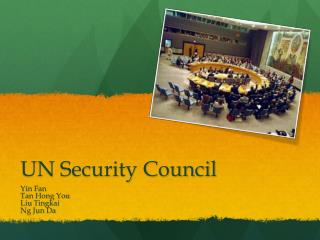 UN Security Council: the expansion debate - . “the un’s most powerful decision-making body is its most prominent

The UN Security Council and Civil War - . first insights from a new dataset. a civil war is an… armed conflict

The Security Council (1) - . membership in 2006 the council is composed of five permanent members — china , france ,

United Nations Security Council - . the security council has primary responsibility, under the charter , for the