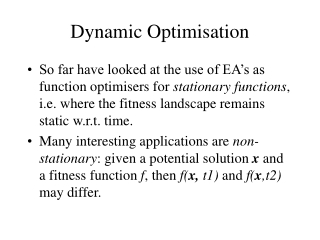 Dynamic Optimisation. So far have looked at the use of EA’s as function optimisers for stationary functions , i.e. where the fitness landscape remains static w.r.t. time. Optimisation - . “optimisation” is a misnomer – “improvement” strictly a better term optimisation for execution

Medicines Optimisation - . this meeting is organised and funded by pfizer. uk/php/13/0087 may 2013. agenda. pfizer

Website optimisation - Ultimate seo guide for tradies: do you want to learn how to do seo step-by-step? read

Linear Optimisation - . example 1: bursary 1991 question 2. a video chain has been conducting research for a new