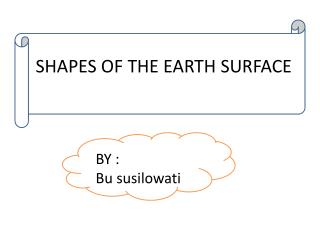 Rational Shapes of the Volatility Surface

Surface Features of the Earth - . by: malorie little all fun facts are in green !!!. deposition. deposition can cause

UNIT 18 SURFACE OF THE EARTH - . what features are found on the earth’s surface?. 1. continents and islands continents

Earth Surface Environments - . surface processes in drylands. the namib. when/where are my practicals and fieldtrip? a

Glaciation – Wearing Down the Surface of the Earth

WHICH FORCES SHAPE THE SURFACE OF THE EARTH? - . conceptual basis of second half of course. earth’s surface. external

FORCES THAT CHANGE THE SURFACE OF THE EARTH - . mountain range, canyon, &amp; delta. l andforms are subject to change

Volume and Surface Area of 3-D Shapes - . volume. volume is the measure of space inside a 3-d object. imagine filling the

Journey to the Surface of the Earth, part 2 - . or, earth from the inside-out. the earth’s interior. yesterday we

Shapes, Shapes, Shapes - . by: ms. kelly. purpose. what is the title of the book ? is this book fact or fiction? how many