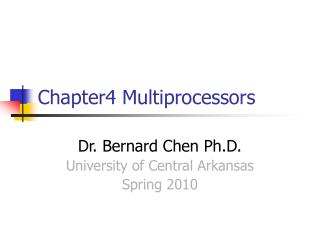 Chapter4: Deposit Services - . i-introduction -deposits are raw material for bank to provide all others its services.

Multiprocessors - . elec 6200: computer architecture and design instructor : agrawal name: nam. why we have to use

Multiprocessors - . speed of execution is a paramount concern, always so … if feasible … the more simultaneous