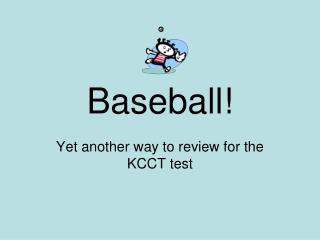 Baseball!. Yet another way to review for the KCCT test. Question. The diagram below shows a simple food web. Which animal is classified as an omnivore? a. red fox b. deer c. black bear d. rabbit. Question. Negro Baseball in America - . from 1884-1888 major league baseball was integrated. first african americans to appear in a

A Derivation of Bill James’ Pythagorean Won-Loss Formula - . what is sabermetrics?. the term sabermetrics, coined by

Dynasty Baseball Advising Package - Why a high school/college baseball player needs an advisor, and why it should be