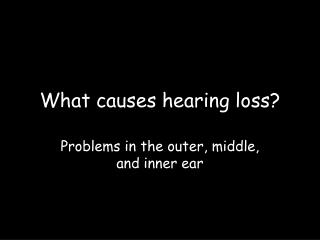 What causes hearing loss?. Problems in the outer, middle, and inner ear. The Outer Ear. Anything that completely blocks the ear canal can cause hearing loss. Blockage with earwax (also called cerumen) is common. Infections with swelling that shuts the ear canal Foreign bodies in the ear MarkeTrak VIII: 25 Year Trends in the Hearing Health Market How do we get on the fast track? - . sergei kochkin, ph.d.

Difference between Hearing and Listening - . hearing non-selective easy physiological. listening process through which

Loss of a F uture L ike O urs: The FLO Argument - . marquis argues that the wrongness of killing beings like us consists

Chapter 5 - . quick review. chapter 2 when do you get a hearing? chapter 3 hearing basics chapter 4 hearing procedure

Your Child with Hearing Loss in One Ear: - . what does it mean to grow up with unilateral hearing loss? what can you do

Supporting Students with Hearing Loss in the Regular Education Classroom - . we will discuss:. hearing loss type and