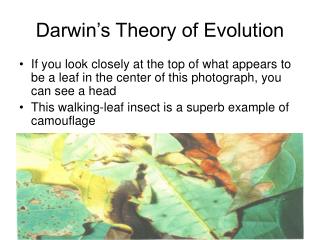 The Evolution of Management and Organization Theory - . lecture 5 – administrative processes in government. the origins

Ideas That Shaped Darwin’s Thinking - . section 15-2 this section describes the theories of other scientists who

Which of the following principals is NOT part of - Darwin’s theory of evolution by natural selection? evolution is a