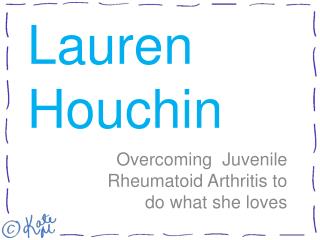 Lauren Houchin. Overcoming Juvenile Rheumatoid Arthritis to do what she loves.

Lauren Brewer - . a powerpoint about me. favorite activities. i love the outdoors camping hiking fishing just being

By: Lauren Noe - Titanic. by: lauren noe. why is titanic still important today?. because a lot of people died, and that

By Lauren Barbo - The puritans. by lauren barbo. in the beginning…. the puritans were a group of people who separated

Spanish for Kids by Lauren Hanewinckel - . http://www.aasd.k12.wi.us/staff/boldtkatherine/spanishforkids.htm. ~ there are

Agenda - . what are we looking for? – lauren which division should i apply to? - lauren the assessment process –