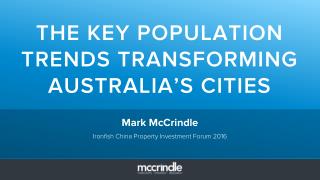 Let's take a look at different aspects of Australia's demographics and how each of our states stack up.
Sydney’s headcount will hit 5 million later this year, but can it keep its place as the nation’s biggest city? The state of Queensland is also set to mark a major milestone, as it hits 5 million, while Melbourne has maintained its lead as Australia's fastest growing city.

WHAT WILL A POPULATION OF 5 MILLION MEAN FOR SYDNEY?
More densification and more urbanisation. 1 in 5 Australians lives in Sydney and it’s been one of the fastest growing cities and from a population perspective it’s Australia's leading city. For every new detached home that is built in Sydney, you now have 2 units or townhouses, so it’s the vertical communities not just the horizontal ones – that’s what will mark Sydney’s future as the city continues to grow.

NSW IS GOING TO HIT 8 MILLION, BUT QUEENSLAND IS GOING TO HIT A MILESTONE TOO
Queensland is closing in on the 5 million mark, and around the same time, Sydney gets to 5 million. Queensland is interesting because it’s the most decentralised of our states, more than half of the population lives outside of its capital of Brisbane. It’s has 11 of Australia's 30 largest cities, while NSW only has 5. For NSW, two thirds of the whole state lives in the one city of Sydney.

IN TERMS OF POPULATION GROWTH, HOW DO THE OTHER CAPITAL CITIES COMPARE WITH SYDNEY?
It’s really all about Sydney and Melbourne, in terms of the size of the cities, they are the largest cities. We have slower growing states like South Australia and Tasmania - in fact Melbourne is adding more people every 11 days than Tasmania adds in an entire year at the moment. Hands-On Software Defined Radio - . getting started with software defined radios - or - “now that i can spell sdr, what

Property taxation - . the treatment of income producing properties in western australia this presentation is illustrated

From nothing to a profitable wholly owned foreign investment enterprise in RunZhou, Zhenjiang, China in 250 days. - From

Investment - 17. investment. in this chapter, you will learn…. leading theories to explain each type of investment why