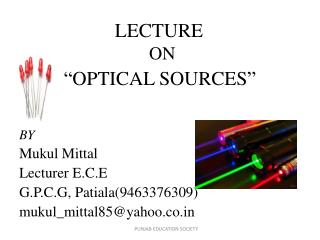 LECTURE. ON “OPTICAL SOURCES” BY Mukul Mittal Lecturer E.C.E G.P.C.G, Patiala(9463376309) mukul_mittal85@yahoo.co.in. What is optical sources and why it is used? . Optical sources are used to produce light pulses, so that data can be transmitted in light pulses inside the optical fiber.