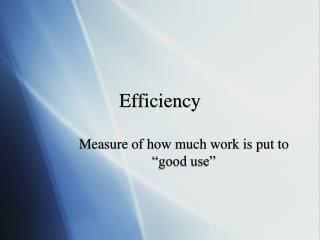 Efficiency. Measure of how much work is put to “good use”. Efficiency of Machines. Law of C of E says that energy in must equal energy out However, often a lot of energy is lost Heat, friction, sound, etc. Efficiency equals (Useful energy out) *100% (Energy in) EFFICIENCY - . by: amanda koon st. robert’s catholic high school. the law of conservation of energy. energy is neither

Efficiency - 2. efficiency. if one process is twice as efficient as another, it may take half as many computers, half as

Efficiency - . begins with resource constraint requires some sense of an end or goal asks about the relationship of means

Efficiency - . a lamp uses 100 joules of electrical energy each second. efficiency is the % transferred as useful energy

Efficiency - . hash functions. maps a key to a number result should be constrained to some range passing in the same

EFFICIENCY - Chapter 10. efficiency. table 10.1 decomposition of productivity gap between india and the united

Market Efficiency - . performance of portfolio managers anomalies behavioral finance as a challenge to the emh. 2.

Transmission Efficiency - Lesson objectives. by the end of this lesson, you will be able to:define transmission

Efficiency Training - Class goals . go away from this classwith some cool stuff you can use every day.provide quick, yet