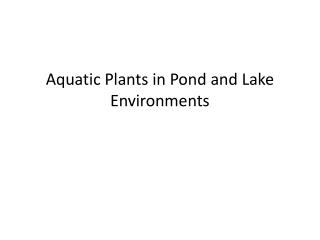 Aquatic Plants in Pond and Lake Environments. Introduction. Different types of plants and animals which live in water, form the complex biotic community and exhibit inter-relationship among themselves. Habitats for Plants and Animals by Denise Carroll - . what is an environment?. plants and animals live together in many

How do you use plants? - . since plants are so familiar, we may overlook how vital they are to human life:. how you use

What is bioremediation? - . the use of bacteria and fungi and plants to break down or degrade toxic chemical compounds

Topic 2 The World of Plants - . standard grade biology. world of plants is divided into: a- introducing plants b- growing

What is botany? - . the scientific study of plants. what is a plant?. what distinguishes a plant from other forms of

Interactions within Ecosystems - . ecosystem- is a community and its physical and chemical environment. examples of

Fire Effects on Aquatic Ecosystems - . guest lecture by christine may. fire effects on aquatic systems. how can fire