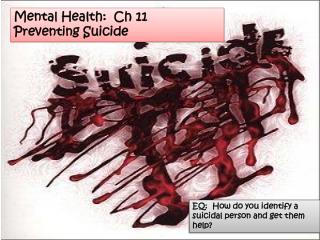 Mental Health: Ch 11 Preventing Suicide. EQ: How do you identify a suicidal person and get them help?. Suicide: The act of intentionally taking one’s own life. Rate has quadrupled in the last 40 years Third leading cause of death among people between the ages 15-24 Combating suicide - . if you are feeling suicidal now, please stop long enough to read this. it will only take about

National Confidential Inquiry into Suicide and Homicide by People with Mental Illness - . the centre for suicide