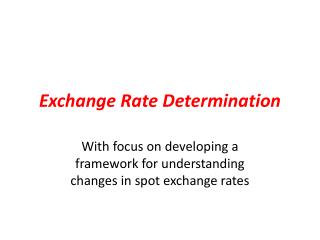 Exchange Rate Determination. With focus on developing a framework for understanding changes in spot exchange rates. Review of Spot Quote. Go to: http://www.fxstreet.com/ Parity Models and Foreign Exchange Rates - . assessing the “correctness” of the current spot rate and estimating

A Game of Exchange Rate Determination to illustrate the concept of PPP - . emre ozsoz , phd fashion institute of