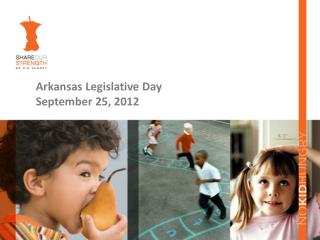 Arkansas Legislative Day September 25, 2012. History of Share Our Strength. Founded in 1984 by Bill and Debbie Shore in r esponse to the Ethiopian famine 1990s: Operated largely as a grant-making organization 2004: 20 year anniversary-announced new focus to end childhood hunger in America September 25, 2012 - . warm up: when someone says they are improvising, what does that mean to you? objective: students

September 25, 2012 - . warm up: where are you getting your ideas for your design? how is it going? objective: students

September 25, 2012 - The 3 p’s of probate production, proficiency, profitability presented by: helen a. lally

Arkansas Legislative Update 2015 - . civics review. path of legislation. your role during the session. educate your