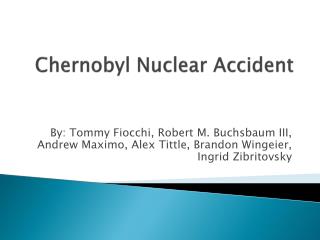 Chernobyl accident - . the chernobyl disaster was a catastrophic nuclear accident that occurred on 26 april 1986 at the

The Chernobyl Accident - And its impact on

The Chernobyl Accident - . where is chernobyl?. -in northern ukraine -10 miles away from belarus -80 miles north of kiev.

Chernobyl Nuclear disaster - . where is it located. reactor. liquidators. the effects on humans. global effects.

Nuclear Disaster: Chernobyl, Ukraine - . ss6g9 the student will discuss environmental issues in europe a. explain the

The Nuclear Explosion at Chernobyl - . that rocked the children’s world. what is radiation

CHERNOBYL - . a city that was by: mikey, andrew, greta, naweed, and daniel. what happened?. inadequate personnel reactor

Chernobyl - . by jacob stocks &amp; seth singleton. who &amp; what?. chernobyl is the name of a nuclear power