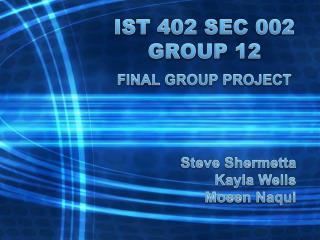 IST 402 SEC 002 GROUP 12. FINAL GROUP PROJECT. Steve Shermetta Kayla Wells Moeen Naqui. The BIG Idea. Our group’s final project focuses on our idea for the creation and promotion of an ethical resources software program that will be to distributed to Penn State University Students. . Chris Johnson ACG2021 Sec.002 - . executive summary. pepsico, inc. is one of the largest and most successful consumer

Ch. 12 Sec. 3 - . the tariff crisis and the nullification act. in 1828, congress passed the highest tariff in the history