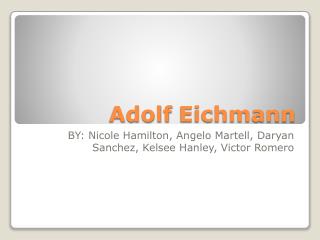 Adolf Eichmann - . one of the most feared and hated nazi leaders who was responsible for the deaths of millions of jews d

Adolf Hitler - . rise to power. objectives:. the objective of this presentation is to give students an understanding of

ADOLF HITLER - . we a re doing this power point on hitler because hitler was the main cause of world war 2 . hitler was

Adolf Hitler - . rise to power. learning targets:. students will be able to explain the early years of adolf hitler and