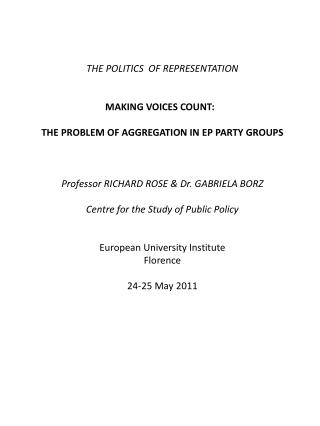 Policies and Politics - Policies – rules, funding, other actions taken by government in pursuit of its goals in this

Chapter 16 Cultural Change and Globalization - . key terms. acculturation a specific form of cultural diffusion in which

Making it Count - . svft injury and illness recordkeeping and recording

Consider : What is the most significant influence on an MoC ? - . homework: assignment #6 for tomorrow; quiz and test

Making the New Year Count - . december 30, 2012. turmoil, difficulties, trials. all around us there are difficulties and

How to make Homeless Point-In-Time (PIT) Count More Successful - . counting everyone - making everyone count. the second

Politics and Reform. - Politics and reform. a. congress emerges as the dominant force in us politics in 1870's - 1900

Voices for Children - . taking volunteer guardian representation to the next level. introduction to the model. what is

Making Every Moment Count - . developing a guide for “everyone supporting someone”!! sandra shafii ahp dementia

Implementation Strategies for Making Diversity Count - . a presentation on the position paper by the university faculty

Making Every Moment Count – in onboarding &amp; induction - . to give you tools and inspiration so that you can