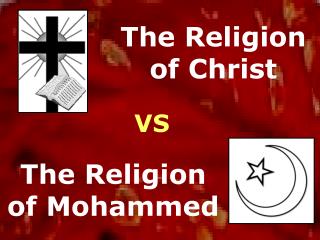 The Religion of Christ. VS. The Religion of Mohammed. Was founded by Christ (Matthew 16:18). Matthew 16:18. “And I also say to you that you are Peter, and on this rock I will build My church , and the gates of Hades shall not prevail against it.”. Religion &amp; State in Malaysia - Religious composition article 3 art 3 (1) islam is the religion of the federation

Chapter 1: Jesus Christ and the Founding of the Church - . history of the church. 1. the life of jesus christ (pp.

Grief and Loss in the Indian Culture and Hindu Religion - . by: britney faulkner. interview. interview with a 26 year old

What is Religion? - . religion is an institution found in all societies. it is classed as an important aspect of social