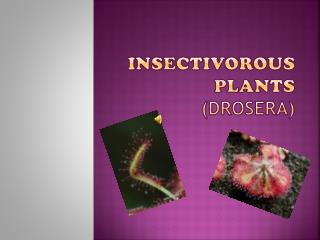 Insectivorous Plants (DROSERA). Leaves and carnivory. Sundews are characterized by the glandular tentacles, topped with sticky secretions, that cover their laminae. INSECTIVOROUS PLANTS - . made by mariam. cobra

Gene flow - Plant of the day drosera rotundifolia ... a miniscule, carnivorous sundew living in bogs in tofino , bc. .