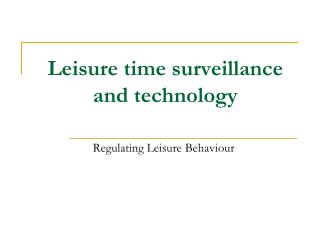 Leisure time surveillance and technology. Regulating Leisure Behaviour. The theorisation of surveillance most commonly associated with the work of Michel Foucault (1977): He argued that surveillance constituted a new discipline of ‘norms’ and ‘behaviour’ Leisure Time &amp; Recreation - . what is leisure time?. leisure time is when you are free to do what you choose

Technology, Time and Texts: - . how state shield laws have kept pace with new media (or not). dean c. smith university of

TECHNOLOGY AND CHRISTMAS TIME - . topics. christmas… what does it mean for you? how do you celebrate christmas?

How Britons Spend Their Leisure Time - . shopping. saturdays are a busy time for shops with families. sunday

LEISURE AND TOURISM - . todays questions. what are the differences between leisure and tourism? how much leisure time do

LEADER IN WIRELESS TECHNOLOGY SECURITY AND SURVEILLANCE - . security is one of the primary concerns in every

Arts and Leisure - . origins of art and leisure. specialization of labor. def-people doing one job. people had leisure

Work and Leisure - . distinguishing between work and