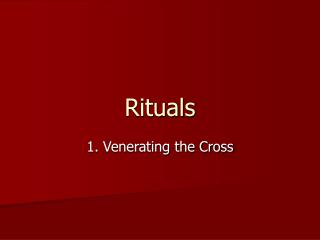 Rituals - . 1. venerating the cross. manifestations of veneration. we sign ourselves with the sign of the cross before

Rituals - . marriage and family interaction hperf258. what are family

Rituals - . chapter 4. part i. introduction. ritual can be defined as patterned, recurring sequence of events when

Rituals - . marriage and family interaction hperf258. what are family

Hindu Rituals - . from birth to death. birth. when a baby is born into a hindu family it is often welcomed with a

Death Rituals - Funeral rituals mainly done to comfort the living, while providing a way for the soul to remove itself

Reading - Rituals - . 2 paragraphs and pictures - discussion. describe yourself as a reader. describe a reading ritual

Jewish Rituals - . and celebrations. in this section. discussion on the following: life itself as a ceremony within the

Chapter 3 - Rituals - . distinguishing the practical versus the symbolic sometimes they can be intertwined rituals are

Chapter 3 - Rituals - . distinguishing the practical versus the symbolic sometimes they can be intertwined: walking in

Anti-Therapy Rituals - . meant to bring about harm ex: the fore (from ch. 1) cause of kuru – sorcery