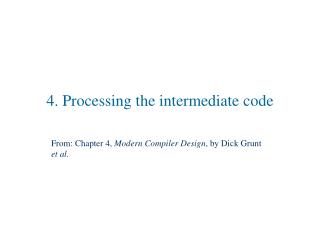 4. Processing the intermediate code. From: Chapter 4, Modern Compiler Design , by Dick Grunt et al. 4.0 Background. The AST still bears very much the traces of the source language and the the programming paradigm it belongs to: Intermediate Code Generation - . recall. the objective of a compiler is to analyze a source program and produce target