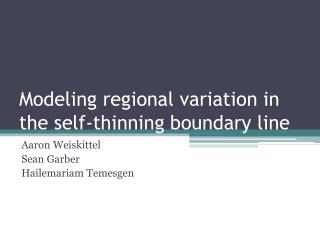 Modeling Using Variation - Direct variation. if a situation is described by an equation in the formy = kxwhere k is a

Modeling using Variation - . 1. the daily profit p varies directly as the number of units sold n. if the profit is $4131

Modeling the Atmospheric Boundary Layer (1) - . review of last lecture. vertical structure of the atmosphere and

Regional variation in health state preferences - . does it exist, and does it matter?. eleanor pullenayegum, on behalf