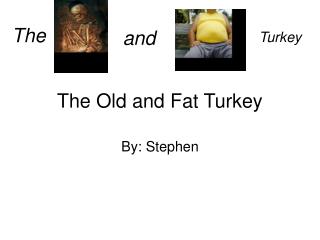 The. and. Turkey. The Old and Fat Turkey. By: Stephen. Once there was a turkey named Bob. Bob escaped the slaughter house more than 100 times. He was old and fat and nobody liked him because. He was old and fat. He went on the computer until he found what he. was looking for. Bridging the continents - Turkey opens one of the world's biggest suspension bridges, creating a new link between two

Thanksgiving is over Christmas is coming soon! Did you carve the turkey the right way? - Linkedin shows us how to the

Syrian Kurdish refugees flooding into Turkey - At least 130,000 refugees have poured into turkey over the past three

welcome - . about me teaching english when i was a kid cone of learning about smartkids. about me. mert balin –