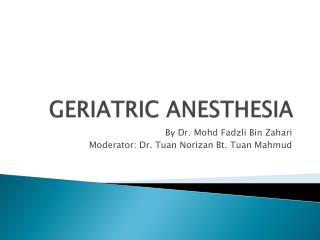 Anesthesia for the Geriatric Patient - . jonathan weed, md. all of the following are associated with the age-related

ANESTHESIA FOR A GERIATRIC PATIENT WITH HEART DISEASE - . dr.balavenkat,dr.kalyanasundaram,

Anesthesia - . in the “old days” the following were used for anesthesia. alcohol drugs ice for numbing blow to the

Anesthesia - . history &amp; introduction. history part 1. the 16 of october 1846 marked the start of a silent

Anesthesia - . preparation . removal of food and water is recommended for 12 hours prior to

ANESTHESIA - Surtex laryngoscopes are designed and manufactured to make intubation simple, convenient and as safe as

Geriatric Imaging - Geriatrics. branch of medicine dealing with aged and problems of aginggeriatric patients are persons

Geriatric Rehabilitation - . what would be the most appropriate assistive device? 78 y/o f s/p (l) tka w/ severe ra of