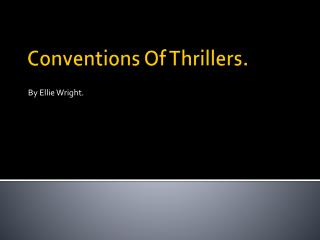 By Ellie Wright. Conventions Of Thrillers. Narrative Conventions. The term thriller refers to a movie that has tension and excitement normally in a thriller narrative there are 5 stages… -A state of equilibrium at the outset. Codes and Conventions of Thrillers - . jack, josh and liam . characters. people with dark history's or backgrounds who

Codes and Conventions of Thrillers

Thrillers - . research task 1. an overview of the thriller

Thrillers - The lumiere bros. "a train appears on the screen," "it speeds straight at you - watch out! it

Best Thrillers - Thriller movies will give you the excitement you desire. there are so many reasons why the thriller

Conventions of Punctuation - . 20-23. tutorial #1. tutorial #1: use commas to set off nonessential phrases important

Conventions of Theatre - . things that aren’t “real” but the audience accepts as a reality!. conventions of

Conventions of Print - . how to write a sentence properly. . start with a capital letter. t he cat likes to sleep. spaces

Conventions of Drama - . listen carefully for the answers to each fill-in-the-blank statement. . drama. one of the oldest

Hot New Thrillers and Mysteries - . back to the beach 2013. bit about your speaker. it by day. librarian and bookseller

Conventions - . the 6 th trait. definition of conventions. anything a writer does to edit the text and make it ready for