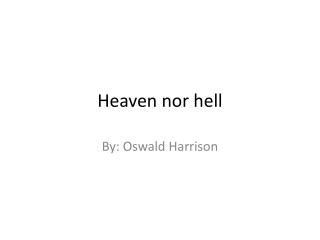 Heaven nor hell. By: Oswald Harrison. Our story starts in Fawcett City, with young orphan Billy Batson. He was homeless, living alone in a condemned building. Heaven, Hell, Purgatory - What do you imagine about these places?. explain what you think heaven, if it exists, could be

Heaven and Hell - Lo: i will explore the concept of heaven and hell i will analyse christian teachings about getting into

Between Heaven and Hell - . the puritan tradition. literature. puritan literature is often stereotyped as overly pious,

HEAVEN AND HELL CONTINUED - Heaven and hell continued. last week we learned that: the pearly gates and streets of gold

Heaven, Hell and Purgatory - . by the end of the next two lessons: you will understand the christian beliefs of heaven,

“Between Heaven and Hell” - . the puritan tradition pages 132-136. purpose for discussion. to introduce the

CHAPTER 3 HEAVEN AND HELL - Chapter 3 heaven and hell. what do you think hell is like?. how comfortable are you with

Visions of Heaven and Hell - . storytelling and literature lecture 1 sept 5, 2017. the descent into

“True devotion is for itself: not to desire heaven nor to fear hell.” - . rabia al-adawiyya. the abbasid dynasty