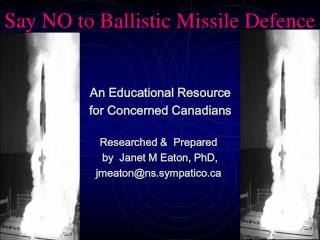 BALLISTIC MISSILE DEFENSE - . how big is the threat?. bush’s promise. 2000- campaign pledge to deploy an effective

HOW TO SAY NO - . refusal skills. communication strategies that can help you say no when you are urged to take part in

Say No to Plastic! - Http://21bottle.com/plastic-the-convenient-killer/ we all consume plastic in our daily lives in

Say No! To Plagiarism - . what is plagiarism ?. plagiarism: plagiarism is the practice of taking someone else’s work or

Say no to bullying - . identify opportunities and possible challenges in using the material across the school discuss

Say No to Bullying - . a classroom presentation from the members of the g-house of representatives. what is bullying?.

Say No to Bullying - . social alimentation indirect bullying intimidation what leads to bullying before you bully..think!

Say “No” to Bullies - . it might start with a misunderstanding. then it turns into rumors and teasing. most of the

Say NO to Bullying - . by: britni kerl and sabrina poindexter. standard and rationale. standard #3: learning