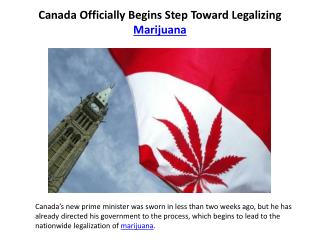 Canada’s new prime minister was sworn in less than two weeks ago, but he has already directed his government to the process, which begins to lead to the nationwide legalization of marijuana.
Read more
http://www.ganjababy420.com/canada-officially-begins-step-toward-legalizing-marijuana/