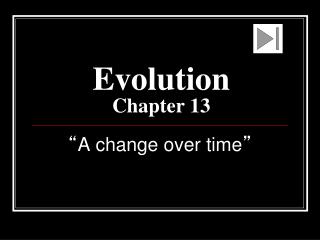 Chapter 13 Evolution and Natural Selection - . evolution. evolution is a change in the frequency of genetically

Chapter 14.1 Evolution - . evolution -  is all of the changes that have transformed life over an immense time. in a

Chapter #29 Evolution - . chapter 29.1 notes. adaptation is a trait that makes a living thing able to survive in its