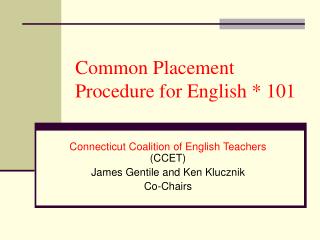 Advanced Placement English Language and Composition - . exam hints and information. given in may 3 is passing two parts

Where Students Place in English &amp; Math… And Why Placement Matters - . presentation to board of trustees october

Welcome to Pre-Advanced Placement English II - *some changes may occur, but notification will follow. welcome to

Accuplacer Testing For English as a Second Language: - . some guidelines. placement test guidelines. you must take the