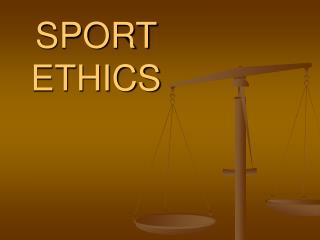 SPORT ETHICS Ethics is the study of morals or character; a study of the principles of human duty or the study of all moral qualities that distinguish an individual relative to others.

SPORT ETHICS - . &quot;to educate a person in the mind but not the morals is to educate a menace to

ETHICS IN SPORT - . week 12. what you need to know…. be able to analyse and evaluate ethical dilemmas in sport

Ethics in Sport s1o3c - . advanced exercise science and sports medicine jared b jones. to educate a person in the mind,

Ethics for University Sport and Sport in General - . an oral presentation for winter universiade conference erzurum,

Ethics and High Level Sport - . pages 241 - 244. aggression and sport. controlled aggression is a fundamental part on

3.2 Ethics and deviance in sport - . learning objectives. to understand the methods of doping in sport and why athletes

Sport And Bookmaking: A Question Of Ethics? - . nicolas beraud ceo of betclick brussels, 17th of february . sport and

1.2 Sport , ethics and OAA as recreation - . what are the characteristics and objectives of sport? what are sporting

Sport - . which sport?. some matches can last for 5 days. the most popular sport in the world. the most important game of