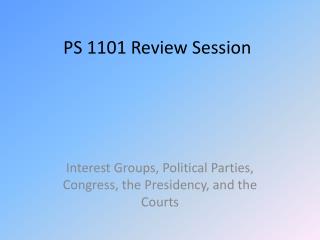 PS 1101 Review Session. Interest Groups, Political Parties, Congress, the Presidency, and the Courts. Interest Groups. 2 views Madison: factions are dangerous (Federalist 10) Pluralism: allows for focused representation Why so many interest groups in the US? REVIEW SESSION - . or the whole of psychology in under 90 minutes. higher level cognition. availability

Review Session - . saturday, 3 pm ph 104. figure 25-17 problems in the oxidation of unsaturated fatty acids and their

Review session - . in this lecture we will review the major models that we have developed in the course. this course has

Review Session - . linear regression. correlation. pearson’s r measures the strength and type of a relationship between

Review Session - . what is data, what is information, and give a real world example to differentiate these two concepts.