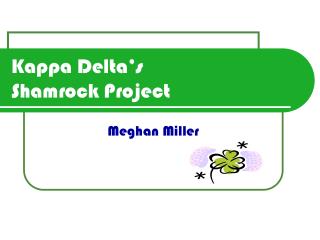 Kappa Delta’s Shamrock Project. Meghan Miller. Shamrock supports-. Our Gamma Mu chapter of Kappa Delta hosts a flag football tournament every year in the Spring to raise money for “Prevent Child Abuse America.” This has been one of our sorority’s biggest philanthropies since 1891. Welcome to Criminal Law and Procedure - . what are we doing?. the people of the state of new york v mike delta and alfred

A Professional Fraternity - Kappa psi pharmaceutical fraternity, inc. since you have chosen the profession of pharmacy,

Community Service - . the joy of giving back. the purpose of community service. to help give back to society to mature