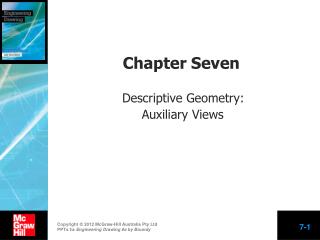 Chapter Seven Descriptive Geometry: Auxiliary Views. Purpose. This chapter provides an overview of how to: understand the spatial relationship between points, lines, plane figures and solids when these features are represented in orthogonal projection Chapter 1: Tools of Geometry - . objectives: to understand basic terms of geometry to apply the segment and angle

Fundamentals of Descriptive Geometry - . at 301 dr. trent. introduction. most of the concepts of this chapter have

Auxiliary Views - . engineering graphics. objective. to understand how to generate views that show inclined and oblique