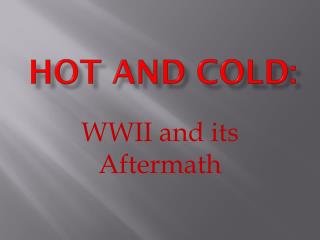 Hot and Cold:. WWII and its Aftermath. Describe the Holocaust. Jews were forced into camps where they were imprisoned and killed by Adolf Hitler and the Nazi troops. The Dropping of Atomic B ombs. Ended WWII. Hot And Cold In Gillette WY - Experience the relaxing and peaceful atmosphere of this new neighborhood. remington village

The Hot and Cold Summer - . lesson 1. pact . a pact is an agreement between people or countries where you promise to do

Hot or Cold - Revelation 3:20 (nasb) 'behold, i stand at the door and knock; if anyone hears my voice and opens the door,

Hot and Cold Water Lesson 2 - . the big idea of this

Cold War Hot Spots - . unit 4 lesson 11. objectives:. describe how communists rose to power in china and how the us