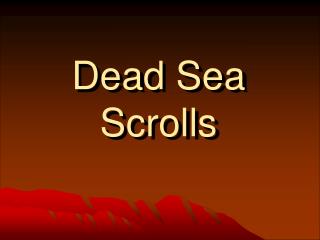 Dead Sea Scrolls. Until the discovery of the Dead Sea Scrolls, the oldest available Hebrew manuscript of the Old Testament was one produced around 1000 AD, almost 1400 years after the last book (Nehemiah, c.425 BC) was composed. The Dead Sea Scrolls - . what are the dead sea scrolls?. remains of over 800 ancient manuscripts written in hebrew,

Dead Sea - . bárbara modesti and lucas presotto. localization. located in the jordan valley, the jordan river is the

DEAD SEA - . the lowest spot on earth. background. located in the middle east, between jordan and israel. top surface of

The Dead Sea - . location/formation. located between jordan, the west bank, and israel. just outside of the traditional

The Dead Sea - . dead sea started its formation millions of years ago with the forming of the great rift, also known as

Dead Sea desiccation - . lawrence nemeh 2014. dead sea basics. one of the saltiest seas in the world lowest elevation of