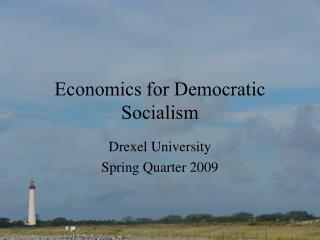 Economics for Democratic Socialism. Drexel University Spring Quarter 2009. Revision of Outline. I told you this class is an experiment! This week: I still need to talk about classes and their relevance to 2008-9

CHAPTER 1: What is Economics? - . chapter checklist. define economics, distinguish between microeconomics and