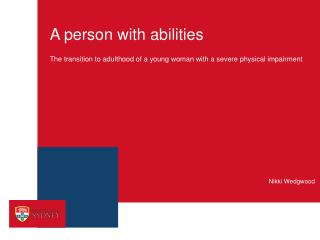 A person with abilities. The transition to adulthood of a young woman with a severe physical impairment. Nikki Wedgwood. Study Rationale. Little research on adolesc (10-18 y/o) or emerging adulthood (19-24 y/o) as significant, transformative and distinct life phases. Children With Special Abilities - . the college street normal school model the journey - so far!. no right way or

Person with Disabilities - . according to the united nations, a disability is a temporary or permanent physical,

Person A - . looking down from the roof of a house at an angle of 23º a shiny object is seen. the roof of the house is

“A person is a person through another person…” Nelson Mandela - . africa is very young, very urban, and very poor.

Living with a Smart House for a Person with Dementia - . tim adlam bath institute of medical engineering www.bime.org.uk

Inside Abilities - . daniel kline and lauren mchugh. what are abilities? architecture postmortem. table of contents. what

Human abilities - . presented by mahmoud awadallah. what do we perceive in a glance. of a real-world scene?. bryan

Be Yourself A Fashionable Person With Macy’s - We do nothing out of the ordinary. we can redirect with certain coupon

What is a person? When is a person? - . the abortion cases. two types of laws. constitutive tempting analogy to chess